Homeless in Tulsa: The Point-in-Time Count 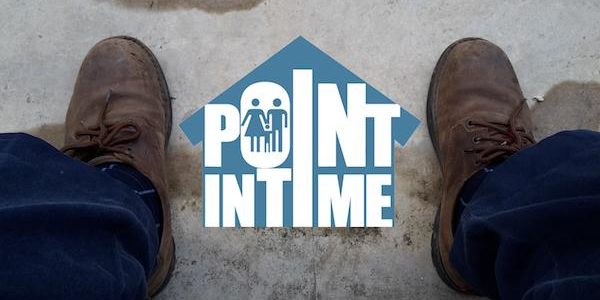 On January 26, Family & Children’s Services (FCS), along with the Tulsa Police Department and volunteers, conducted a point-in-time survey of homeless and formerly homeless to help determine an accurate count of homeless individuals in Tulsa County.

The Point-in-Time (PIT) count happens once a year all over the country and is one of the best methods of measuring the number of homeless on a specific day.  This type of counting is known as “taking a snapshot” of a situation. This year, I was one of those volunteers in Tulsa, Oklahoma. This is my “snapshot” of the evening.

FCS, as well as other providers of service to the homeless, want individuals to come into shelters or other agencies for services as they are safe.  FCS encourages people not to do a lot of ‘give-aways’ to the homeless because this enables them to live on the streets.

As I stepped outside, the cold air hit my face. I zipped up my coat, wrapped myself in my scarf and placed my beanie on my head making sure to cover my ears. I had only been outside for two minutes and I was already miserable. The low on January 26 was 28 degrees Fahrenheit.

I had no idea what to expect or how to react to my evening on the Point-in-Time count. My team was calm and ready to help the homeless community. I wasn’t sure I was ready to see how people live on the streets, especially in the cold.

Marlaina Moody, FCS Homeless Outreach Team case manager, was our team lead. Marlaina knows the ins and outs of Tulsa and where most of the homeless community stays.

On our first stop, we picked up the blessing bags that would be given out to the homeless who participated in our survey. Blessing bags are filled with the basics (socks, gloves, hats), toiletries, first aid items, treats and sometimes a journal and pen. All the volunteers were eager to get started. It was refreshing to see everyone committing their evening to helping meet the needs of our homeless community.

We loaded up in the van and headed to south Tulsa. Our first stop was dark and cold; I turned on my flashlight and began to follow the team. We were walking along Riverside underneath the bridges. It wasn’t exactly something I was used to doing and I was hesitant.

Under one of the bridges, we found blankets and coats but no people. My heart sank. People actual live here? People sleep here? As we kept walking, the wind picked up and I began shivering. I zipped up my coat the rest of the way to keep most of the cold from hitting my face. My hands were ice cold and I began to sniffle. After walking a bit further with no luck, we moved on to the next location.

An hour went by, and still nothing. We were getting discouraged when we saw a man standing at the corner of a Starbucks near 71st. He seemed to be a little out of it, but very willing to talk to us. He held a cup of coffee and told us it was cold, but he was fine. One of our volunteers stepped away to go to Starbucks and bought him a new hot cup of coffee. As she handed it to him I could see his face light up. He was grateful and you could see a faint smile appear on his face.

The man, Douglas, had red hair with a beard to match and his glasses sat on the bridge of his nose. He was soft-spoken, 65-years-old, and stood with his backpack and coffee. We soon found out that he became homeless 5 or 6 years ago when both his parents passed away. This meant that this man had a home and then in a blink of an eye he didn’t. He stays in shelters every now and then, but for the most part, he has lived mostly on the streets. After the survey, we handed him a blessing bag. He thanked us and began to walk away.

As we walked back to our van, I reflected on how Marlaina was so natural with him. They talked as if they were life-long friends. He was a normal looking man who got dealt a bad hand that ended with him on the street. My eyes began to water as I thought about where he would sleep tonight. After this evening ended, I knew I would be in a warm bed snuggled up with my dog. Does he know where he will be sleeping? Will it be warm?

Our next stop was behind a Lowes store. Marlaina knew of a woman who had been staying there for a few weeks. We drove to the last location she was seen, but it had been cleared out. Disappointed, we didn’t think we would find her until we drove around the corner. There she was. Pricilla was sitting in front of an unoccupied storefront. Her beanie and a jacket weren’t keeping her warm, but her fire red hair let off heat that fit her personality. She was cranky until she recognized Marlaina, her friend.

We wanted her to complete the survey, but she didn’t want anything to do with it. We did learn that she has been homeless for about four months, but seemed to be in denial. When asked her how long she had been homeless she kept insisting she wasn’t. We could tell by her clothes and her lack of personal belongings that she wasn’t being truthful. Unfortunately, Pricilla rejected our efforts to link her to resources. The outreach team at Family & Children’s Services visits her every week to check on her and continues to offer our services.

There is a large community of homeless individuals in Tulsa that need help. There are many ways you can get involved.

It took me stepping out of my comfort zone to learn what I never could see. You have the chance to educate not only yourself, but others as well.  Friends, family and people within your community will benefit greatly from a compassionate and informed point-of-view.

As you learn more about the problem of homelessness, share what you find out with those around you. Family & Children’s Services reaches out to assist mentally ill homeless individuals and their families. We offer mental health care, substance abuse treatment and linkages to housing and other community resources. To learn more visit www.fcsok.org.

Greer Fites retires after 42 years as a social worker
July 1, 2020
Sign up for our E-News
Get the latest news and inspiration from F&CS.
Categories
Go to Top