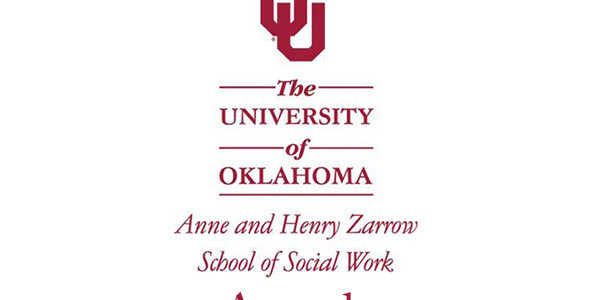 Family & Children’s Services employees Greer Fites and Nic Dubriwny were honored on May 5 during the master’s level graduation party for students from the Anne and Henry Zarrow School of Social Work at the University of Oklahoma.

Fites received the 2018 Oklahoma Heart of Social Work Award, an award initiated over a decade ago at the request of social work students who wanted to honor field instructors and the enormous commitment they make to their students and to the development of professional social work in the state of Oklahoma.

Greer Fites, a 1978 graduate of The University of Oklahoma School of Social Work (OUSSW), has held a variety of positions at a number of agencies in the mental health field. She began her career at the Oklahoma Department of Mental Health and Substance Abuse Services (ODMHSAS) in Norman Oklahoma, at what is now known as Griffin Memorial Hospital. There she provided inpatient social work services to adults with severe mental illness. Her leadership in mental health services led to administrative positions for ODMHSAS and other non-profit agencies in Tulsa Oklahoma.

Fites has served on a number of boards, including the National President of the Association of Behavioral Healthcare Management. She has been an active member of National Association of Social Workers (NASW) since 1978 and served two terms on the State Board of the NASW, as Unit Chair in Cleveland and Tulsa Counties.

She has happily continued to be involved with OUSSW since graduation: supervising numerous practicum students, teaching as a community faculty member for the past 3 semesters, being a member of the OUSSW Board of Visitors since January 2015, and serving on the scholarship review committee in 2015 and 2016.

Some of her other community involvement has included Leadership Tulsa Class 30, All Souls Unitarian Church Board of Trustees Member, and board member and former president of the Oklahoma Religious Coalition for Reproductive Choice.

Nicholas Dubriwny is a clinical supervisor in the school-based department of Family & Children’s Services (F&CS). An Oklahoma native, Nic earned his baccalaureate degree in Philosophy from the University of Oklahoma in 2002. After several years of putting this philosophy degree to use selling books and drinking coffee, Nic began working for CAP Tulsa as a teacher’s assistant with the Head Start program. It was during this time that he returned to school and earned his Master’s degree in Social Work in 2011.

After his experience as an intern at F&CS, Nic began his clinical career working in the school-based department. His first role as a therapist was at Rosa Parks Elementary, where he continued to pursue his interest in working with children and their families. Firmly believing in the resiliency that children inherently have, he strives to build on the strengths of the individual while providing the family with new pathways to achieve success. After working at Rosa Parks for 3 years, Nic transitioned over to Jenks East Intermediate, where he worked until becoming a clinical supervisor in 2017. Nic is trained in a number of different modalities, including TF-CBT, ITCT-A, ACRA, Solution-Focused Therapy, and Motivational Interviewing, among others.

While earning his MSW, Nic served as a graduate assistant, splitting time between the social work department and the human relations department. During this time, he co-authored an article on instruments used to measure teen dating violence as well as creating case studies, one of which is currently being submitted for publication as a part of a larger collection of case studies to be used in the classroom. Within the HR department, Nic worked as part of the Center of Applied Research for Nonprofit Organizations, much of which continued post-graduation. Additionally, Nic helped conduct an initial study on Hope and it its relation to mental health organizations. This culminated in a 3-year study with a local child abuse prevention and treatment organization. This study examined the impact of various treatment modalities, utilized data to improve service delivery, and studied changes in Hope over time. Upon completion, the study’s outcomes resulted in a recently accepted publication entitled “Hope as a Coping Resource Among Parents At-Risk for Child Maltreatment”.

More recent research included a study conducted by the Tulsa Hardesty Fab Lab on the impact of STEM-related educational programs on students’ attitudes and perceived self-efficacy in regards to science and technology. This research was ultimately accepted for presentation at the international Fab10 conference in Barcelona, Spain, as well as a publication in the Journal of STEM Education entitled “Impact of Fab Lab Tulsa on Student Self-Efficacy toward STEM Education”. Nic is also currently engaged in his second year of research with the Christian Camp and Conference Association measuring the impact of summer camps on children’s hope and overall well-being, with early outcomes showing an increase in overall child well-being by the end of camp.

In 2015 Nic began teaching as an adjunct faculty at OU, focusing on applied research in the field of Social Work. Nic’s teaching philosophy is to treat graduate students as future colleagues, focusing on how to better translate research to true-to-life professional experiences that require the utilization of outcomes-based measures to both inform practice and display client progress. Realizing the lack of affinity many students have towards research, Nic’s efforts focus on creating engaging conversations, a relaxed atmosphere, and of course, infusing the course with self-deprecating humor.  Connecting with students and sharing his enthusiasm for both research and social work is one of his greatest joys, and he was recently awarded the 2018 Adjunct Faculty of the Year award for his efforts.

F&CS communicator obtains 2020 Bronze Quill Award of Merit
August 6, 2020
Sign up for our E-News
Get the latest news and inspiration from F&CS.
Categories
Go to Top