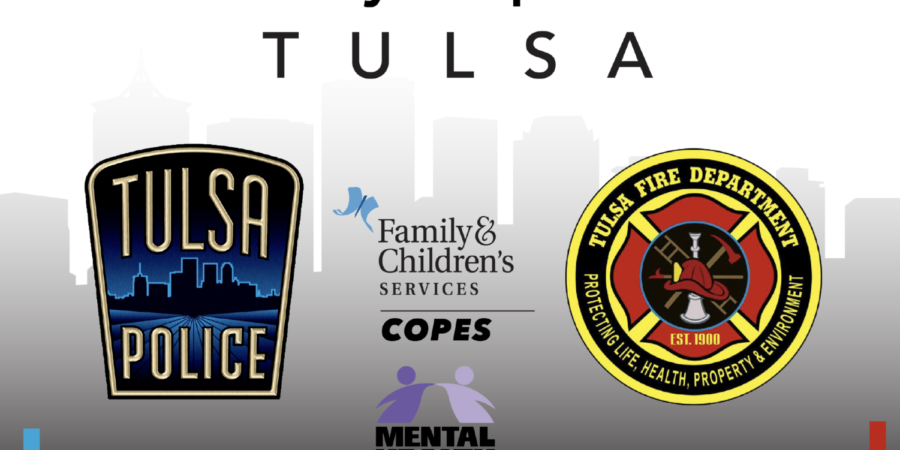 UPDATE: The Community Response Team is set to launch February 13 on a twice-a-week basis after being awarded a $106,000 grant from the Tulsa Area United Way, with a goal to become self-sustaining and expand its days of service.

Tulsa has one of the highest rates of mental illness and suicide in the nation. Despite the enormity of the problem, state funding for public mental health continues to decline, resulting in an under-resourced system for early intervention and treatment. Consequently, highly treatable issues spiral into crisis, overwhelming first responders with emergency calls.

Part of Tulsa’s solution is the advancement of an innovative new first responder program – the Community Response Team (CRT). An integral part of Tulsa’s Community Policing program, CRT is a collaboration between the Mental Health Association OK (MHAO), Tulsa Police Department (TPD), Tulsa Fire Department (TFD), and Family & Children’s Services’ Community Outreach Psychiatric Emergency Services (COPES). The Tulsa Area United Way provided $106,011 in special community collaboration funding that allows the CRT to operate two days each week. The United Way’s community collaboration grants encourage cooperation among partners to meet specific community challenges.  Additional seed money for the CRT was provided by John and Sarah Graves, who have long been loyal contributors to F&CS.  Their interest in the CRT was a natural extension of their longtime support of F&CS’ COPES program.

Mayor G.T. Bynum said, “Community Response Teams are a great example of our approach to problem-solving: breaking down the old parochial silos and bringing together the best experts in our community to address a specific need.  I am thankful for the United Way’s strong support of this innovative program and am eager for us to serve even more Tulsans in need over the year ahead.”

The new CRT model, piloted last August with much success, optimizes time and resources by integrating COPES mental health professionals into a team of traditional first responders ­– TPD officers and TFD paramedics. During the pilot, over 90 of the City’s first responders were released from the scene of mental health-related calls to which the CRT responded, keeping those personnel in service and available to respond to other emergency calls. Just as importantly, the presence of F&CS mental health professionals helped to connect the clients served in those emergency calls to longer-term resources and treatment, increasing their chances for positive outcomes and recovery.

Family & Children’s Services CEO Gail Lapidus said, “Collaboration is the bedrock of the CRT model with each member bringing different specializations, training and expertise to the team.When combined, these capabilities bring value-added services to individuals in crisis, and make our community a better, safer place for all.”