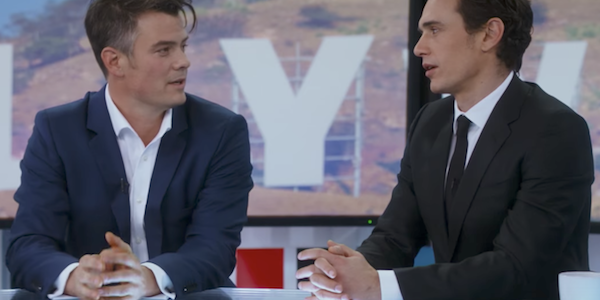 A note from Family & Children’s Services about The Show

Remember 13 Reasons Why? The show graphically depicted suicide but doesn’t address prevention and where to get help. Now on the horizon, the film The Show  arrives in theaters and is available on demand on Sept. 15.  Viewer be warned, the trailer is disturbing and The Show’s rating is R for “disturbing and violent content involving suicides, language throughout, and brief drug use.” In the United States, suicide is the 10th leading cause of death – a very real, and tragic, thing that destroys lives. It’s not a game show.

In The Show, Josh Duhamel plays Adam Rogers, a Chris Harrison-like host of a dating show that ends in an attempted shooting – which is traumatic enough, until the network exec (played by X-Men actress Famke Janssen) decides to create an entire reality show about contestants killing themselves.

It is directed by and co-stars Giancarlo Esposito (Breaking Bad and Better Call Saul) and also features James Franco as a morning show host reporting on the on goings of the live death cast.

Here is the movie’s official synopsis:
“After a dating show ends in violence, its host Adam Rogers (Duhamel) and a ratings-hungry network exec launch a terrifying new program that promises fresh kills every week. The tension mounts as a kindhearted janitor joins the deadly program, hoping to help his struggling family survive…at any cost.”

Family & Children’s Services can provide Questions, Persuade, Refer (QPR) training free of charge if you know of any community partner that may ask what they can do to help or learn about suicide prevention.

From the American Association of Suicidology about The Show

Some members of the American Association of Suicidology (AAS) have viewed Giancarlo Esposito’s new film, The Show, about a reality TV program that exploits the on-camera suicide deaths of its players. While AAS was not involved in, nor consulted during its production, we believe every instance of suicide in the media is an opportunity to have a conversation about it, and additionally to review suicide prevention efforts on a larger scale.
National Suicide Prevention month is September. The release of this movie is of particular importance when organizations across the country are raising awareness of this critical public health issue.

The suicide prevention field cannot control media portrayals of suicide. What it can control is its response to it. AAS is collaborating with media partners, including movie studios, regarding effective and beneficial ways to portray suicide, suicide loss and attempts, and suicide prevention.

Colleen Creighton, Executive Director of AAS says, “Building relationships with entertainment industry professionals will have a lasting legacy of eliminating prejudice and discrimination of those with mental health issues while maintaining the integrity of artistic and creative freedom.”

While over 44,000 people die from suicide in the U.S. every year, over a million more attempt suicide and go on to live productive lives that do not end in suicide. Media professionals and journalists tend to focus on the sensational aspects of suicide deaths, but a larger positive social benefit is possible by focusing instead on the very real stories of hope, healing, and recovery that we know is possible.

“Be aware of those around you, check in with them, and ask them how you can help. If you are personally affected, please reach out and seek support,” says Julie Cerel, President of AAS.