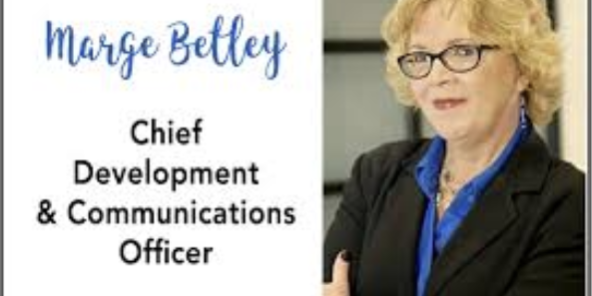 Marge Betley joined Family & Children’s Services in June 2016 in the newly created position of Chief Development & Communications Officer.  Previously she served as statewide Director of Development for the Oklahoma chapter of the Alzheimer’s Association.  During her tenure there the chapter raised a record-breaking $1.3 million for its Tulsa Memory Gala and over $7 million for Alzheimer’s research.

Betley has served in leadership positions in nonprofit organizations across the country including Stagebridge Senior Theatre (where she was Executive Director) and Los Cenzontles Mexican Arts Center (Chief Operating Officer), both in the San Francisco Bay Area; the New Music-Theater Ensemble in Minneapolis (where she served as inaugural Managing Director); and Geva Theatre Center in Rochester, New York, where she led nationally recognized programs to develop new theatrical work and create community dialogue and engagement.

Betley lives in Tulsa with her fiancé, Greg Weber, who serves as General Director/CEO for Tulsa Opera.

F&CS communicator obtains 2020 Bronze Quill Award of Merit
August 6, 2020
Sign up for our E-News
Get the latest news and inspiration from F&CS.
Categories
Go to Top