Brooke traded her drug addiction for a running addiction 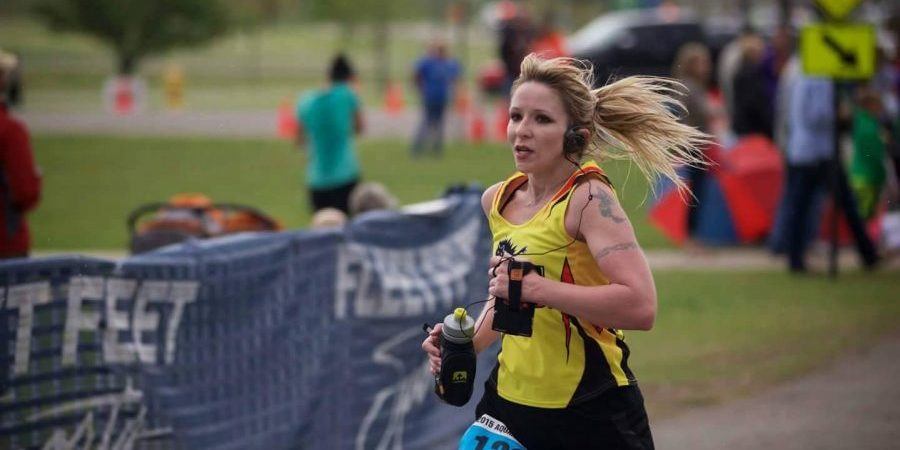 Brooke spent sixteen months of her life in prison due to drug charges. After serving her time, she was granted a year judicial review. At her review, Women in Recovery (WIR) accepted her into their program. That is when Brooke’s recovery, and committed to fitness, began.

When Brooke was released from prison she soon realized how much weight she had gained – 184 pounds. She had never weighed that much in her life.  “People typically think that you will lose a ton of weight while you are in custody, and that is usually true; however, my family put money on my books for commissary so I turned to food for comfort,” Brooke said.

At WIR, one of Brooke’s sessions focused on commitment. The therapist offered a challenge to the women – to commit to one thing for an entire week. Brooke decided that running would be her commitment.

As a part of her rehabilitation, she was on house arrest and had to wear an ankle monitor. Her day was split between WIR and home, nowhere else. Her house was small with a tiny backyard. Despite these obstacles, Brooke was determined to lose the weight. She started running the perimeter of the fence line in the backyard. She got up every day and ran for one week. By the time the week was over, she was hooked. “I couldn’t even start my day out without running. If I skipped a day I just didn’t feel right,” she exclaimed. “It was like I traded my drug addiction for a running addiction.”

Brooke still runs and is also involved in crossfit five days a week as well as completing ultra-marathons.

Brooke graduated from the WIR program in April 2012. Thanks to WIR, and Brooke’s determination, she is now living a healthy life. In fact, on February 18 she is participating in the Fleet Feet Sweetheart Run.

Fleet Feet Sports Tulsa | Broken Arrow is a generous supporter of WIR, donating running shoes and resources to the women of WIR.

As part of their ongoing commitment to giving back, the Sweetheart Run, a popular road race with distances of 5k, 10k, and a Fun Run, will give a portion of each participant’s registration fee to one of three charities that the participant may choose: Animal Rescue Foundation of Tulsa, Community Food Bank of Eastern Oklahoma, and Family & Children’s Services.

Lori Dreiling, co-owner of Fleet Feet Sports Tulsa | Broken Arrow said,“As local small business owners, we realize the importance of giving back to our city. We are thrilled to support these local charities so that they can continue their efforts to impact our community in a positive way. It just shows that shopping at and supporting small, locally-owned businesses is often paid forward in ways that benefit the community you live in.”

Dreiling says that for each participant, $3 of their registration fee will be donated to one of the three nonprofit organizations. Participants are also given the option to donate more should they desire. “The Sweetheart Run is a Tulsa tradition near Valentine’s Day, so what better way to celebrate your sweetheart, than to participate and help us raise money for several worthy local charities.”

Gathering Place extends ‘Love and Harmony’ to Women in Recovery
April 29, 2021
Sign up for our E-News
Get the latest news and inspiration from F&CS.
Categories
Go to Top