Rodger says, “I’m so grateful and feel so free now from my past because of my treatment.”

Rodger has been struggling with drug addiction for more than 26 years. His relationship with his family had deteriorated, and he ended up homeless and on the streets, living and sleeping wherever he could. His goal in life wasn’t living; it was getting high.

Rodger was falling in a downward spiral towards a point of no return. Drugs temporarily allowed him to escape his problems, but that wasn’t enough. He essentially had several run-ins with the law. He was in jail in a small county known for sending a lot of folks to prison without considering other options. He had been to prison three times.

With the latest arrest, Rodger was facing prison for the fourth time. He reached out to a deputy he knew, who was familiar with drug court. He was ready to change his life. The deputy referred him to Family & Children’s Services (F&CS) for treatment, and he was eventually accepted into the Tulsa Drug Court program.

“I had never been through an outpatient treatment and didn’t know what to expect,” Rodger said. “I knew I did not want to use drugs anymore. That was a good starting point, but what I came to learn at F&CS was my drug abuse was secondary. I learned I used (drugs) to self-medicate or mask deeper hurts and hang-ups that haunted me since I was a teenager.”

“Through peer groups and one-on-one counseling, I was able to recognize and identify the real issues as to why I used – the thoughts and feelings that led to behaviors that lead to my need to use drugs. Things I didn’t want to think about and even deeper issues that I had suppressed. I’m so grateful and feel so free now from my past because of my treatment.”

There was a couple who helped Rodger with a temporary place to stay. He was overwhelmed with everything he had to do in the program – treatment, UAs, court, supervision, working.  He found a job, and the couple lent Rodger a car until he could save up on his own.  One of the court coordinators recommended to him that he go to Workforce Oklahoma to look for a job, and he remembered that.  He eventually went and found out he could attend welding school to learn a trade and start a career, and that the schooling would be free to him.  He completed school and is working as a welder. Rodger credits Drug Court with giving him the opportunity to change his life and become a contributing member of society again.

Rodger is one of about 106 clients who obtain outpatient services through F&CS Adult Mental Health division. The division continues its mission to provide outpatient treatment services to clients in drug court, mental health court, female diversion and other programs in Tulsa County. According to the Oklahoma Department of Mental Health and Substance Abuse Services, out of 25,000 inmates, the Oklahoma Department of Corrections estimates that nearly 12,000 inmates have a history or currently exhibiting symptoms of severe mental illness.

Without this contribution, many clients would have otherwise been revoked or sentenced to a period of incarceration. Outpatient treatment services are less expensive and is generally reserved for those who can stay in their communities while they work on their addiction issues. Depending on need, the F&CS programs either has a set schedule, in which people who enroll are expected to appear in groups with other people at times that cannot be varied and/or have an appointment-based system that could accommodate issues such as work and childcare.

Family & Children’s Services Adult Mental Health hosted a drug court graduation at 10 a.m. Friday, July 26 at the OSU Tulsa Auditorium. Graduation day for clients is a major accomplishment. Friends and family, and all of the program staff – from the judge, to court services team, supervision staff, treatment staff and other community partners who have worked with clients attend graduation. The graduates are given ribbons for accomplishments such as being sanction-free (no broken rules throughout the entire program) or Distinguished Graduates. “Before and after” photos are shown of each client, comparing the day of arrest, which started their Drug Court journey, to graduation day, which is the start of a new life. Graduates are proud, excited and very grateful to everyone who helped them, supported and believed in them and held them accountable along the way.  Tears are shed by graduates, families, and providers and team members alike. 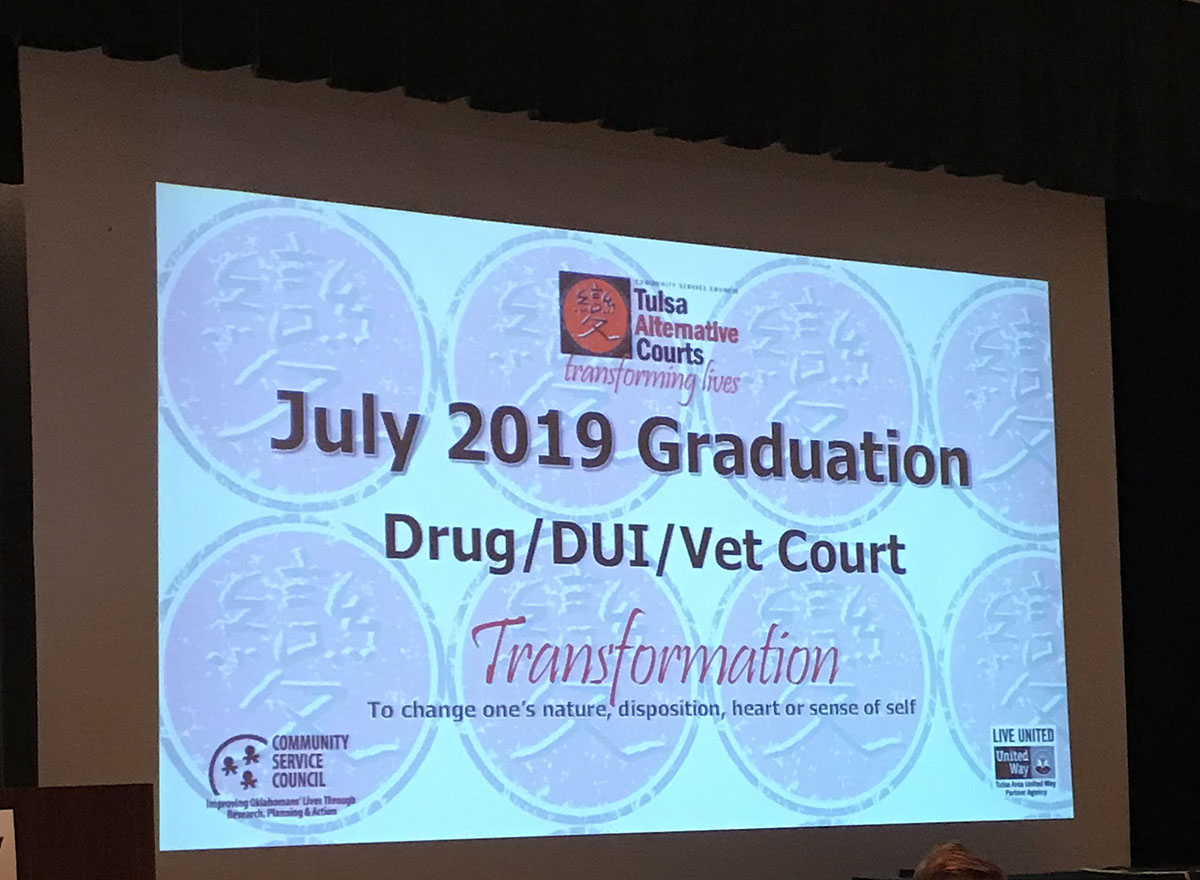 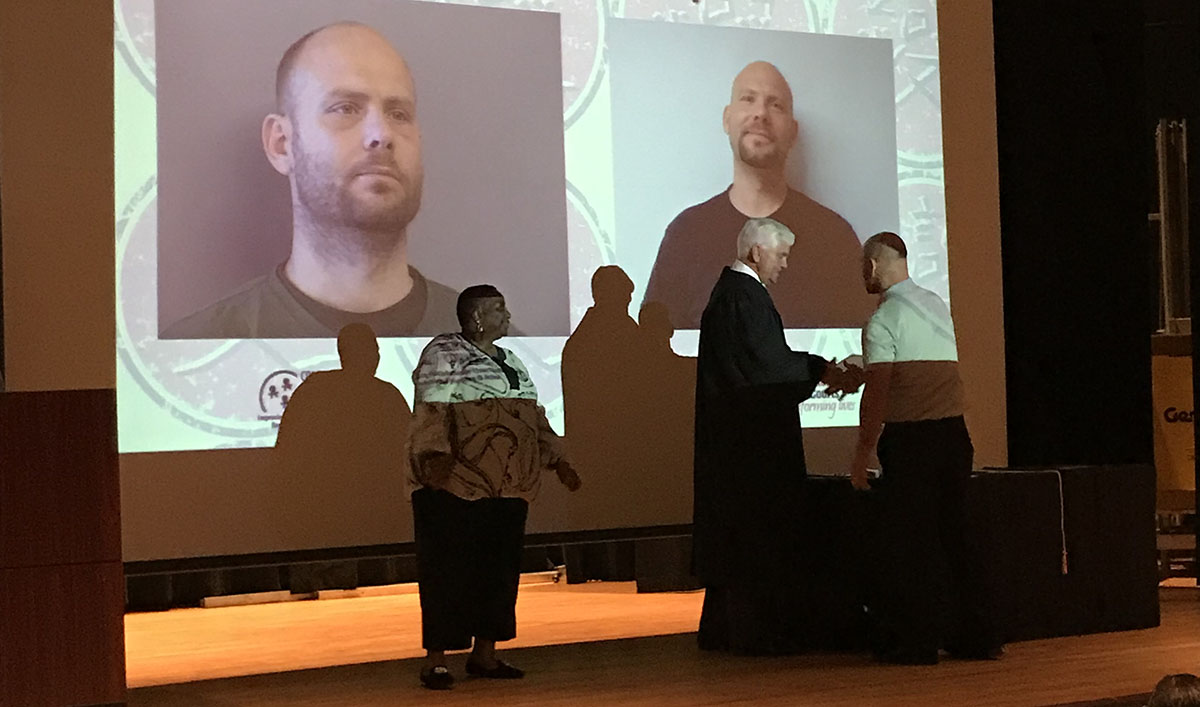 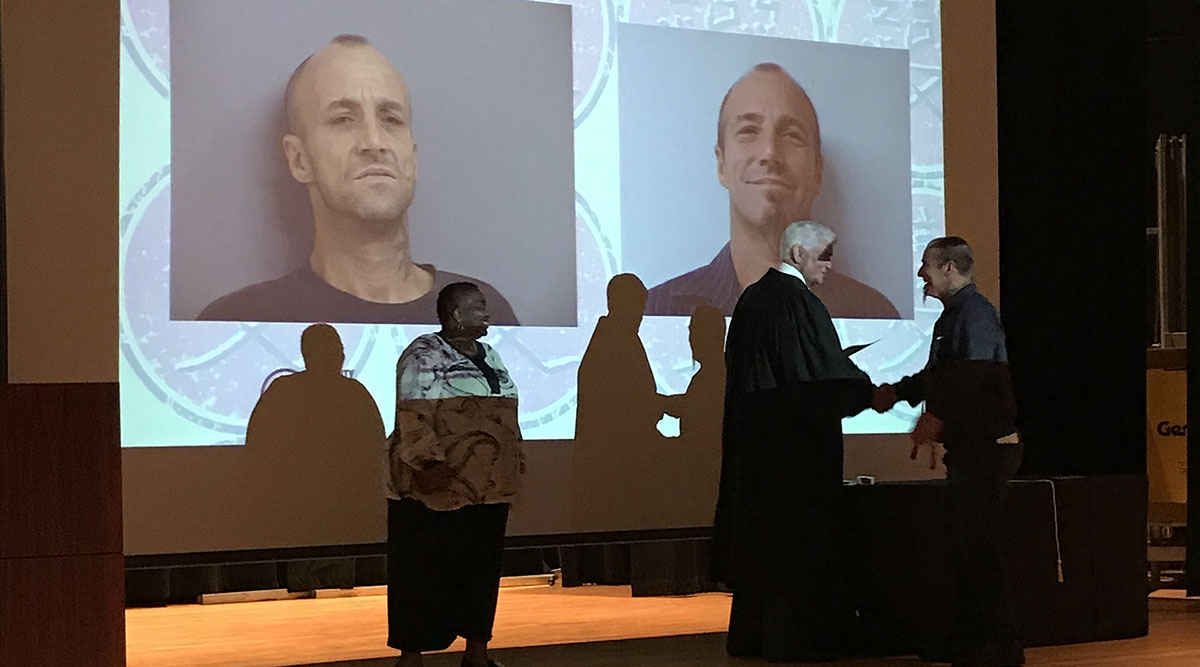 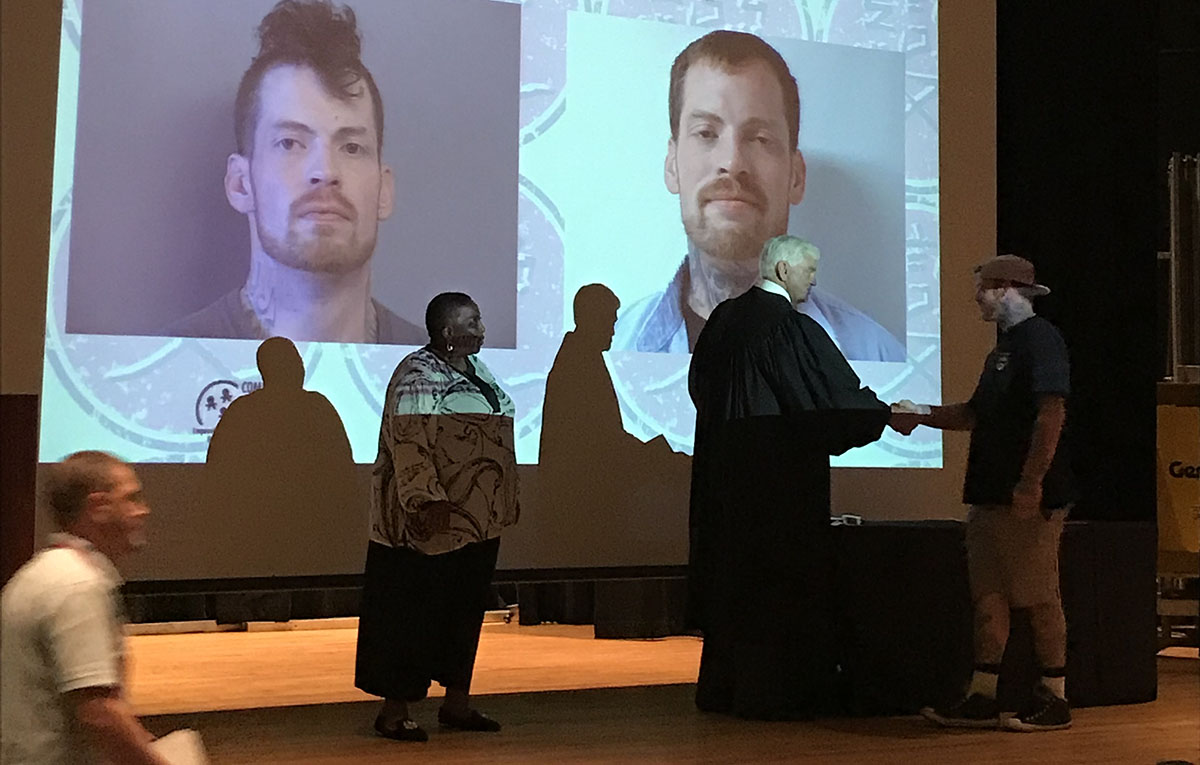 Sam says, “If it weren’t for everyone, my success in this program would not have been possible. You saved my life and care when I was not able to care for myself.”

Mental health courts were developed in response to the inability of traditional courts and jails to address a defendant’s underlying mental illness. In Oklahoma, 79% of female inmates and 46% of male inmates were diagnosed with a mental illness. Of these individuals, 57% were incarcerated for nonviolent offenses, and out of those in Department of Corrections custody, 33% were imprisoned for drug and alcohol offenses and at least 50% were incarcerated for a crime related to substance abuse.

One of the major goals of mental health courts is to provide individuals with the help and services they need so that they won’t offend again. It also reduces the cost to maintain an inmate in prison – from $48 a day to approximately $15 to $25 a day given the extent of mental health/substance abuse services.

Some of the ways the courts do this is by linking offenders with serious mental illnesses to local behavioral health service providers, developing individual treatment plans that serve the offenders and the community, offering intensive supervision by the courts and implementing expectations for adherence to all conditions and requirements. The F&CS Osage Hills currently services 77 clients.

In conclusion, the programs rendered by F&CS staff reduces incarceration/recidivism and offers therapeutic approaches. For example, when the client is accessed by the courts, they have the option to be released from jail to go inpatient for stabilization before being moved to outpatient. This approach increases program engagement and success rates. Because of F&CS’ relationship with other community partners, the whole person is treated – not just the mental health or substance symptoms.

Family & Children’s Services hosted a Mental Health Court last week at the Tulsa City-County Library in downtown Tulsa. Mental Health Court graduates wear caps and gowns and are honored with cords for achievements.  Before and after photos are shared, and there are graduates who give moving speeches, thanking everyone for helping them make graduation day possible. Family & Children’s Services (F&CS) work with the jail and court systems to divert non-violent mentally ill individuals into treatment, help them meet court standards and set treatment goals for recovery. 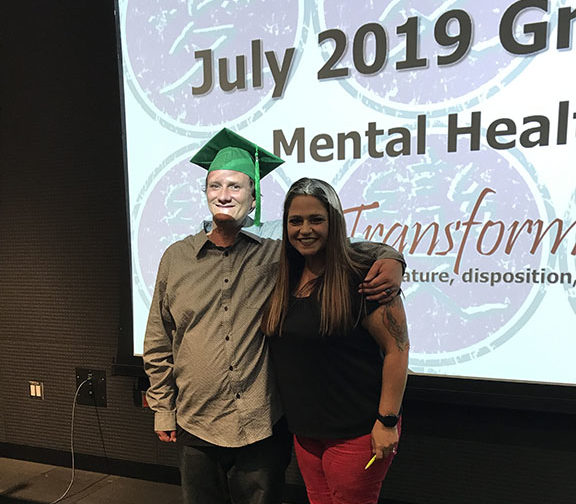 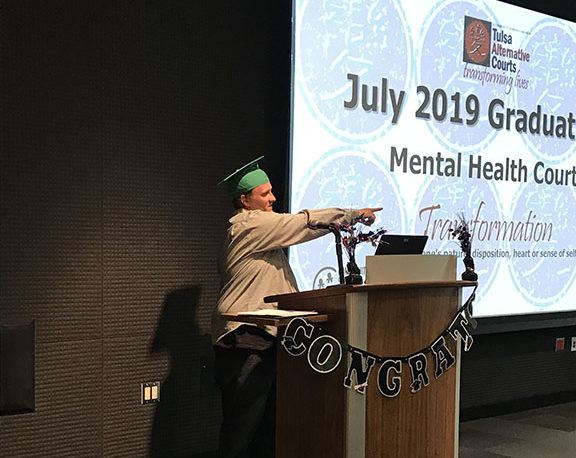 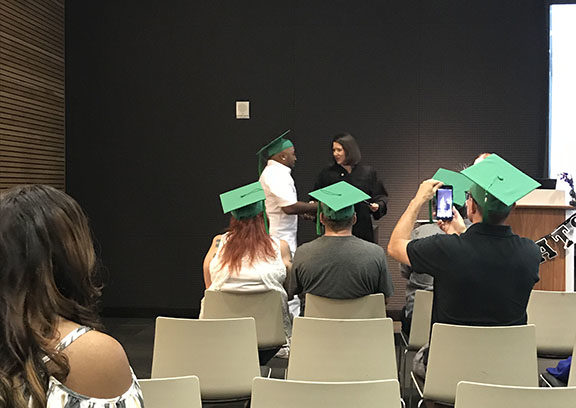